We gave our Review Team one job:
Find the best and most popular dive computers and review them. Our review team always considers durability, price, quality, and value in their reviews.

Our review team:
Summer Worsley
Contributor at DIVEIN.com
Summer has been teaching scuba for the last 10 years.
Torben Lonne
PADI instructor and Review Editor
Torben traveled around South East Asia for scuba diving and almost didn’t come back. His affinity for gear that works and his generosity for guiding people on their own path match his energy as editor of all things travel-related
Disclosure: We are reader supported, and earn affiliate commissions If you find a good deal on DIVEIN, you click to the retailer, and you buy the product, we get a commission of the sale. That's is how we pay ourselves. It does not make the product pricier for you. when you buy through us.

The Shearwater Teric is Shearwater’s first foray into a watch-sized dive computer. Don’t be fooled by its small size, the Teric is a full spec, no-nonsense technical dive computer that’s suitable for the most serious tech diver thanks to its many added extras.

It has all the modes you want, including recreational and even freediving. Unlike some computers, the freediving mode hasn’t been added in as an after-thought, instead, it’s designed to meet the needs of even high-level competitive freedivers.

It also looks good out of the water as a very stylish watch that wouldn’t be out of place in the boardroom.

Which is Better, the Shearwater Teric or the Garmin Descent?

On paper the Garmin Descent wins hands down, it’s cheaper, has more features, and does basically the same job. However, in actual use, we prefer the Teric.

With a slightly larger screen and controls that are far more intuitive, the Teric is a pure dive computer. It won’t lock you out if you miss a deco stop, an option you can switch off on the Descent but quite frankly, we don’t really understand this default setting. Why would you want your computer to lock you out?!

The Descent is trying to be everything and while that might be handy for those of you who frequently do other sports and only a bit of diving, we’d prefer to have the tried and tested knowledge of Shearwater research behind us when it comes to mixed gas technical diving. 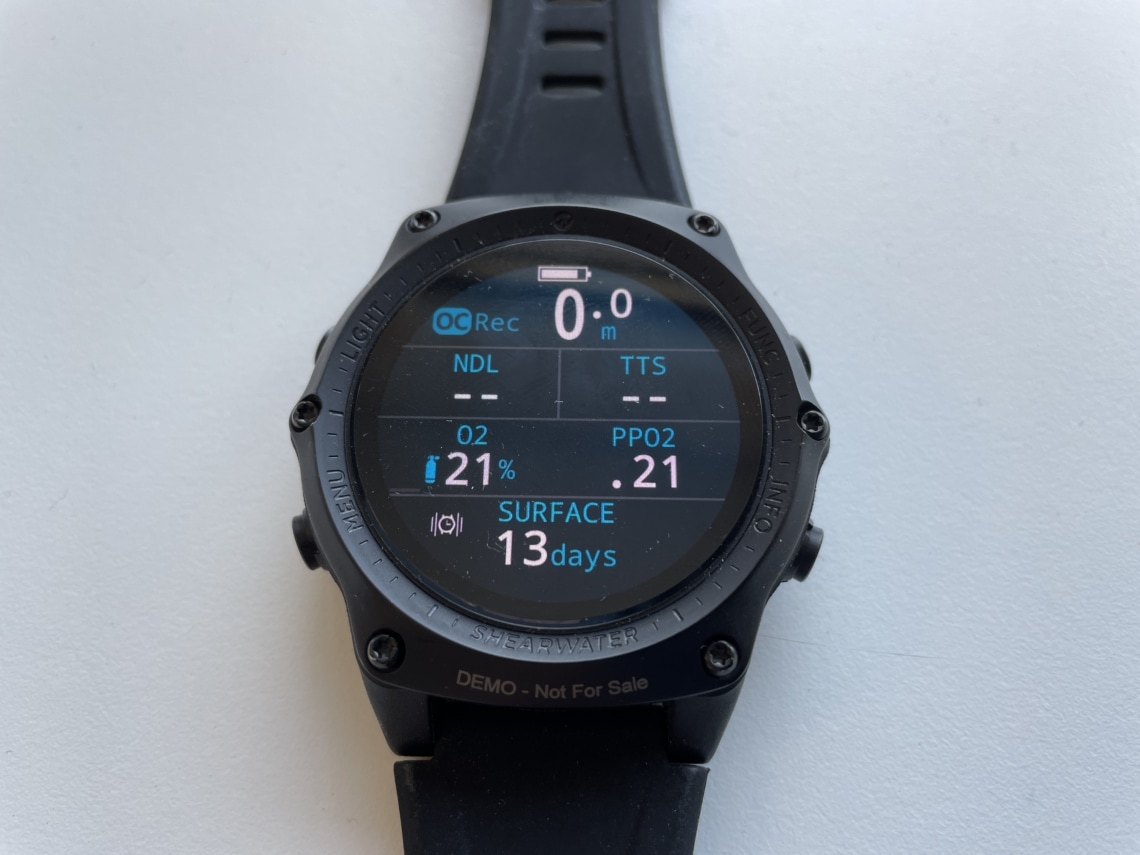 The Shearwater Teric has a clear display that illustrates accurately all relevant info.

What You Need to Know About the Shearwater Teric

Below is a round up of the Teric’s best features.

All of them have the option of two customizable layouts. In OC modes you can program in up to five gases. In OC rec you have the choice of air or Nitrox. And in OC tec you can have air, Nitrox, or trimix. CCR/BO gives you a ppO2 set point with the option of automatic or manual switching and up to five diluent gases. In freedive mode, you can set “Freedive Sets” to allow customized alerts for different types of freediving (there are three defaults preset: deep, pool and repetitive).

The wireless rechargeable battery uses an induction charger that comes with the computer. As an added bonus, it can also be charged with Qi-compliant chargers, meaning you can use the same wireless charger for your smartphone and your dive computer. That’s a real bonus when traveling, the fewer chargers to pack, the better! The battery lasts for around 30 hours in dive mode or 50 or more in watch mode.

The Teric supports wireless pressure monitoring of up to two tanks. Unlike most air integrated computers, the Teric can be permanently paired to a transmitter meaning you won’t be hanging around waiting for your computer to sync with the transmitter every time you switch tanks.

You can choose which information relating to the transmitter you want on the home screen, or you can view it on the separate air-integration (AI) info screen. The options available are T1 and T2 (tank 1 and tank 2) pressure, gas time remaining (GTR) and surface air consumption (SAC).

GTR gives you an added accurate parameter to your dive limits (along with the no decompression limit) by letting you know exactly how long you have left at a given depth before a direct ascent to the surface (at a rate of 10m/33ft per minute) is required. It will recalculate if you start working harder, for example, swimming faster into a current, or if you change depth. 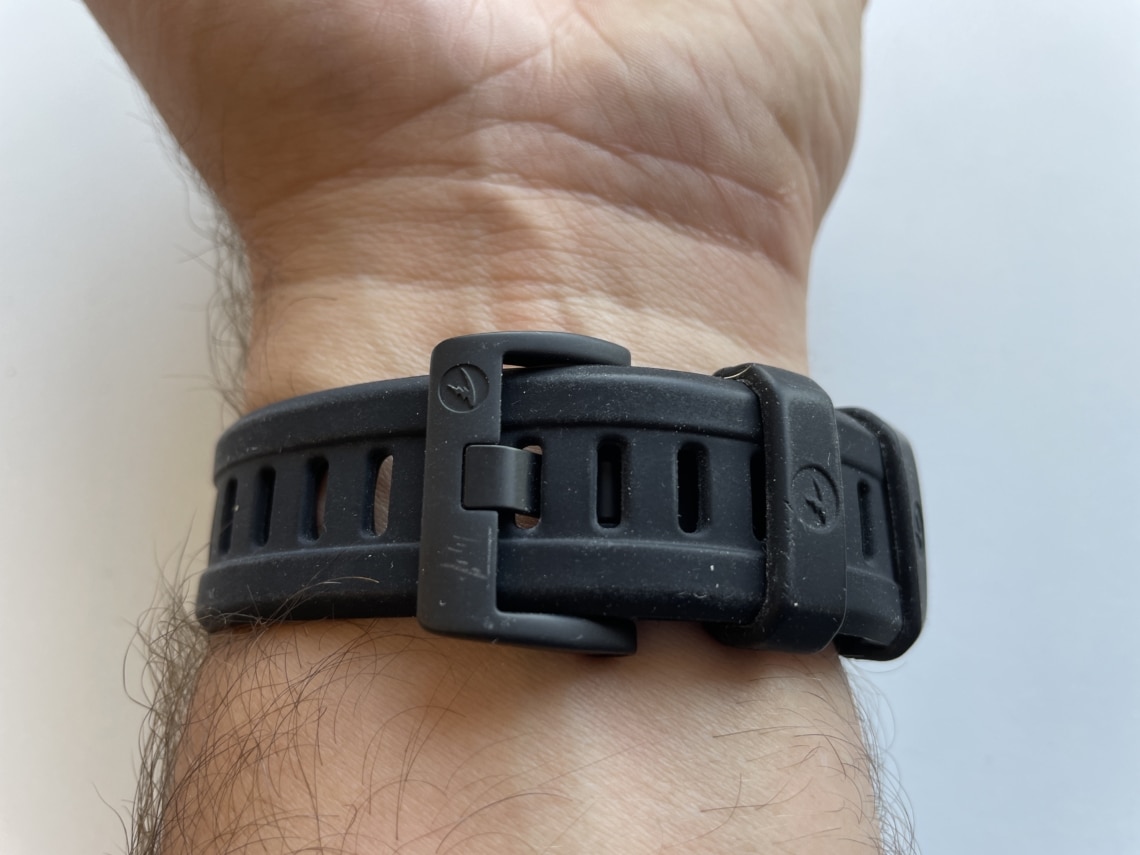 The Teric has an enviable number of customizable options. It comes with a durable stretchy, silicone strap in black but there are five other color options available including Shearwater blue and pink. With a standard 22mm strap size, many off-the-shelf straps should fit the computer too.

The watch has a choice of three different faces, each with three slightly different interfaces.There are 15 screen color choices, with the ability to change the font color for different configurations.

The home screen is the main display you see while diving and shows you all the information you can possibly want. There are two layouts; ‘big’ and ‘standard.’ In standard, each dive mode’s home screen can be independently customized to allow you full control over the most relevant information for your dive.

No matter what you choose to have on show, the rest of the info is visible by scrolling through the computer. You can easily check your maximum depth, your ceiling, the temperature, and anything else you deem not urgent enough to have on your home screen but is still nice to know.

On top of all this, the Teric also offers you a function button. You can configure this to launch your most commonly used tool such as the compass or the gas switch function.

With all these options it seems like the Teric should be incredibly complicated to use. But with four easy-to-use buttons, it’s actually very intuitive. Each button has a hint icon that tells you on the screen what it will do when you press it. This makes navigation through the menus very simple.

A further note on the buttons, Shearwater is a Canadian company, so the Teric has been thoroughly tested in cold water and is easy to use with dry gloves on.

There are two types of alarms available, haptic (vibrates) and audible. Both can be switched off as Shearwater appreciates that some people don’t like being beeped at during a dive. These can be configured for freediving to let you know when you reach a certain depth or time. An option that’s especially useful for freedivers who don’t wear a mask.

The Teric uses the Bühlmann ZHL-16C model. It has been paired with the modern gradient factors approach, which was developed by Erik Baker.

Bühlmann’s model is tissue-based and uses compartments to emulate the tissues in the body. In this case, it uses 16 compartments (the ‘16’ in the algorithm’s name). Each compartment on and off gases at different rates to the others and it is the speed of the off-gassing that determines how deep and how long each stop should be.

Bühlmann controls each compartment with an M-value, which is the maximum tolerable tissue tension in a tissue compartment at any point during the dive (or upon surfacing for a recreational dive).

The gradient factors are a way to alter how much tissue tension is acceptable to you by only allowing the algorithm to use a percentage of the M-value, therefore making the stops at different depths or different lengths than the standard Bülhmann algorithm recommends. A pair of numbers is used to show the low and high values (GF Lo and GF Hi). The first number is GF Lo, which controls the depth of the first stop. The lower the number, the deeper your first stop. The second number is GF Hi, which controls the length of the shallow stops. The lower the number, the longer your final stops.

For more information, it’s worth reading Erik Baker’s Article “Clearing Up The Confusion About Deep Stops”

The Bühlmann algorithm is a tried and tested model that’s been in use for over 30 years. The added ability to customize it by applying gradient factors uses the latest research to allow you to configure the stops where you want them to be.

This gives you the option to have deeper first deco stops and longer — and therefore more conservative — shallow stops. There is a lot of debate about which gradient factors are acceptable and how you choose what to use. The default setting for the Teric is 30/70 for OC Tec and CC/BO modes and 40/85 for OC Rec. It’s worth noting that Shearwater recommends you don’t change these unless you fully understand how they will affect your dive.

For techies who are interested, it’s worth noting that Shearwater do not support VPM, another widely used algorithm. They have not discounted it for future updates, however.

You can find more information about deep stops here and here.

Shearwater’s After Sales and Servicing Support

Shearwater is known for its excellent customer service. It’s a Canadian company but has service centers worldwide, so any problems can generally be sorted out locally, regardless of where you are. Our reviewer had a problem with the screen while on holiday in Egypt, which was covered under the two-year warranty, the local distributor immediately swapped it for a new one, allowing her to continue her holiday.

Shearwater also offers regular firmware updates. These are uploaded via Bluetooth using either the Shearwater Cloud desktop or mobile software, which also can be used to upload your dive log.

Shearwater takes into account suggestions from users, meaning your Teric will stay current for many years.

You can find instructions for your Teric here.

As with most dive computers, the only maintenance required is a freshwater wash after use. There are no user replaceable parts aside from the strap. For storage, it’s recommended to keep it the computer a cool, dry, and dust-free place with a fully charged battery. As some battery discharge will occur, if the computer is stored for a very long time, the battery should be topped up every six months.

You’re a recreational diver who is thinking about a move into technical or CCR diving, you’re already a tech diver who wants a powerful computer that looks good and doesn’t take up half your arm, or you’re a freediver who wants the benefits of haptic alarms.

The Shearwater Teric has packed a lot into this, the company’s first watch-sized computer. Suitable for the serious tech diver (open or closed circuit), the recreational diver who wants something that will grow with them, or the freediver who likes the added extra of a haptic alert, the Teric is ideal for a wide range of divers.

The improved app and downloadable info make for a good dive log for the everyday scuba diver. In this, we see the head-to-head comparison with the Garmin Mk2 or G1.

Its stylish design also looks good out of the water, whether that’s in the boardroom or in the pub after a long day of diving!