For combined Diving and Sport

Our writers and editors always consider quality, value and performance by comparing as many products as possible. The Descent G1 Solar was specifically compared to the MK2i and Similiar models from Shearwater and Suunto.

Our review team:
Hunter Bierce
Editor at DIVEIN.com
Hunter is a PADI-certified Dive Instructor with as keen an interest in words as technical prowess.
Torben Lonne
PADI instructor and Review Editor
Torben traveled around South East Asia for scuba diving and almost didn’t come back. His affinity for gear that works and his generosity for guiding people on their own path match his energy as editor of all things travel-related

The G1 Solar represents a big step forward in both longevity and daily wearability compared to their previous Mk2 models- though this comes at the expense of some significant features. With a more compact build and extended battery life complements of an integrated solar charging feature, the G1 Solar adds a new element of elegance to the Garmin Descent series.

The G1 Solar is very similar to the previous Descent Mk2 models in regard to both their dive-specific and lifestyle technical features. Compared to the scuba-centric Mk2i, the G’s build is trim and slim. Garmin narrowed down the screen from 52mm to a much more manageable 45mm and swapped a heavy steel build for a lighter, more impact-resistant fiber reinforced polymer.

Our favorite feature is the solar support, which considerably extends the battery life of smartwatch functions. Garmin claims that users can expect 25 hours of bottom time for diving, and up to four months between charges when used just as a smartwatch. Though the G1 may take a little bit of a hit on underwater charge, the day-to-day functionality is nearly eight times longer than the Mk2.

With the reduced bulk and significant price decrease, the G1 has trimmed away a couple of features that we’ve seen in other Descent models, air integration being the most significant. Alongside this, the display is monochrome rather than full color, and split into two windows rather than the flashy single screen we see in the Mk2. The G1 also cannot connect to wifi networks, be used for mapping, nor store music.

Despite the lack of air integration, the G1 Solar is still a powerful dive computer with a full complement of functions for divers ranging from rec to tech. It’s rated up to 100m with leak proof buttons, and has a swappable strap that can fit around a suit.

The G1’s multiple dive modes include standard Descent-series support for single and mixed gas dives not limited to nitrox and trimix, as well as an apnea and apnea hunt mode to disable sounds so you can sneak up on your quarry. Freedive modes are customizable and keep track of performance metrics between descents.

On the display you can quickly and conveniently access essential information such as a 3-axis compass, depth, time, temperature, residual nitrogen, deco-stop requirements- essentially all the data and recommendations that a modern dive computer would provide. There are also some convenient features like vibrating depth alerts, and automatic entry/exit point tracking. The G1, along with the rest of Garmin’s Descent dive watches, is built to pair with their Dive App. On the App you can review specifics to keep a more detailed logbook, share information about your trip, and get the scoop on places to check out from other users.

The G1 Solar toes the line between dive computer and smartwatch with more grace than other Descent models. Not being able to connect to wireless networks or download music is a big oversight in this regard, but the G1 performs admirably when it comes to more health-related criteria.

Health and biometric tracking features abound,  the G1 has you covered from sleep monitoring to hydration and menstruation. You can track activities like skiing, running, and golfing through preloaded programs- then use the data to plan your training and recovery via smartphone app.

Beyond helping you record and organize your health data, the G1 can fully integrate with your phone- giving you notifications from texts, calls, tweets, or your social media of choice otherwise. You can also use it for contactless payments through Garmin Pay.

There’s a lot to love about the G1 Solar. But before we give our final verdict let’s take a look at our concerns. We’ve discussed what’s missing from other Descent models pretty extensively- but it bears repeating that no air integration, and no wifi connectivity are awfully damning for a product in the dive computer and smartwatch categories respectively. We also have some concerns about operating the G1’s smaller buttons while wearing unwieldy neoprene dive gloves.

These concerns aside, for less than half the price of the Descent Mk2i, you get way more than half the product. The G1 Solar is a very capable product in both of the niches that it occupies, and certainly has a less ostentatious look than other bulky dive-focused smartwatches.

The Descent G1 Solar isn’t only for divers, it’s also for people who live an active lifestyle and happen to dive. Garmin has softened the edges of price and product and has added an exciting, versatile product to their already impressive lineup. 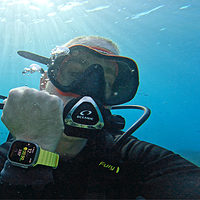 What’s the difference between the Garmin Descent Mk2i and the Descent G1 Solar?

Garmin’s Descent Mk2i is their premium, dive-specific smartwatch built for serious underwater enthusiasts. The Descent G1 is a more relaxed model for divers with active lifestyles who want a watch they can wear every day. Though these two models share many of the same programs and features, there are a couple of distinctions that lead to a significant price difference.

The G1 Solar doesn’t have air integration, Wi-Fi connectivity, mapping support, and cannot download music. This said, it has a significantly longer battery life in smartwatch mode compared to the Descent Mk2i. If you have more questions, check out our writeups of the Descent Mk2i and the G1 Solar to see which is right for you.

How to turn on the Garmin Descent?

In order to power on your Garmin Descent watch, look for the light key on the top left corner. Press and hold until the backlight comes on, and you should be able to access the rest of the functions of the watch.

Which Garmin watches have Air Integration?

Air integration for Garmin dive watches requires you pair it with their T1 Transmitter. Currently, the only model that supports this pairing and air integration is the Descent Mk2i. You can read our writeup of it here, or check out what we think of their sleek and sporty Descent G1 Solar instead.

Do I need a dive computer?

Modern dive computers aren’t required equipment- but they’re nearly there. Most people you talk to will agree that investing in a good computer is a smart decision for any serious scuba diver. There are a lot of different directions you can go to- so to find the right model for you, take a look at our guide to the best dive computers.

Hey Chris. The comment was supposed to read like this, “…isn’t ONLY for divers, it’s also for people with an active lifestyle that dive every once in a while too..”
I, personally, think the G1 wins pretty handily having used it for hiking and sailing too. Its wider application set is great, more versatile than the Suunto D5 for example.
As for not including music downloading, that’s more a note of departure from the MK2 than a complaint. But Wifi downloading makes syncing with the Garmin apps a little easier.

I find this line in the verdict very confusing: “The Descent G1 Solar isn’t for divers, it’s for people who live an active lifestyle and also happen to dive.”. The watch seems to have all the functions of the Suunto D computers, except air integration. I don’t see why the lack of WiFi and Music are seen as a disadvantage for a dive computer.

Would you choose a Suunto D series or a Garmin Descent G1?

That’s a nice setup. Then I think you’re all set with dive computers.

Yes, you’ll be great off with this one for freediving. There are a few different modes that will serve your needs. Apnea will record a whole session, dive time, surface time, depth, max depth, etc.
Guage will show you depth, average depth, a timer, temperature, etc. And Apnea hunt if you’re into underwater hunt.

I bought it as a backup to my Shearwater Teric. When I’m not diving, it has a longer battery life and more features than the Teric. When I do dive, it’ll be a good backup and adds in the GPS location tagging that I miss having on the Teric.

Thanks for review! For freediving should be good I recon. 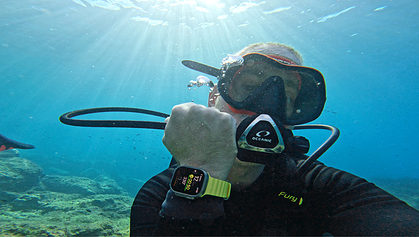