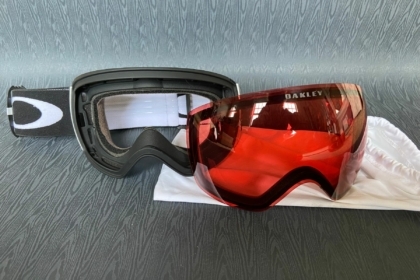 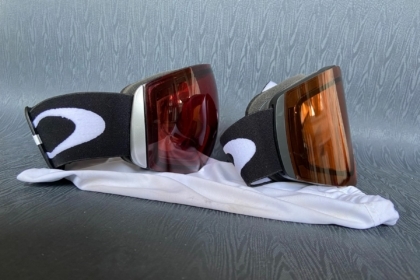 Our review team:
Hunter Bierce
Editor at DIVEIN.com
Hunter is a PSIA ski instructor based in the Northern Cascades.
Bradley Axmith
Editor at DIVEIN.com
Grew up shredding Canadian snowpacks and sold gear to pay for it.
Disclosure: We are reader supported, and earn affiliate commissions If you find a good deal on DIVEIN, you click to the retailer, and you buy the product, we get a commission of the sale. That's is how we pay ourselves. It does not make the product pricier for you. when you buy through us.

Oakley is a titan of the technical and outdoor eyewear market. And the Flight Deck is a classic in the winter sports world. In many ways, it’s the standard-bearer for spherical ski goggles. The wide field of view allows you to keep an eye on multiple moving targets while riding crowded resort slopes.

You’ll see the Flight Deck on every slope from the small and soggy slopes of my home “mountain” in the Cuyahoga Valley to gate-accessed backcountry zones west of the Continental Divide. They’re an industry mainstay, so we had to buy a pair to test out. We can confirm that the hype is real. Oakley and the Flight Deck deserve every ounce of the renown they’ve garnered over the better part of the last decade.

Think the Oakley Flight Deck Prizm is for you? If so, click on the link above for the latest prices or read on for the full review.

The standout feature of these goggles is definitely the lens. It’s massive. In fact, the Flight Deck’s rimless build gives the appearance that they’re lens only ski goggle. This design choice has tremendous benefits and notable drawbacks, but more on those soon.

As I mentioned earlier, the Flight Deck is a quintessential example of the exaggerated spherical goggle. I have a sizeable head and still have no trouble spotting moving hazards out of the corner of my eyes while cruising the resort. I was also impressed with the range of view and how well my single lens held up under rapidly changing light conditions. But this leads us to the Flight Deck’s biggest flaw.

My most significant criticism by far is that it only comes with one lens. While Oakley has a truly staggering number of colors and shades to choose from, there’s no one option that will be appropriate for every condition. If you were to buy a spare with your goggles outright, you would end up spending as much as you would for a cutting edge option with more features.

But for all the trouble, Flight Deck goggles sure look good. One may even go so far as to call them steezy. A compelling reason to opt for these is to abide by that oft-cited slopeside rule of skiing “Look Good, Feel Good, Ski Good.” Their pronounced and stylish appearance is heavily favored by park veterans. It probably has much to do with why the Flight Deck has endured so long in an industry punctuated by rapid season to season progress.

See the complete list of the best Ski Goggles here!

Oakley’s “Ridgelock Technology” is undoubtedly effective in sealing out the elements. But, the process for removing and reinstalling the lens leaves something to be desired. While the process isn’t impossibly difficult, you have to apply an alarming amount of pressure to the frame to pop the lens out.

I have a history of being particularly hard on gear. For my part, I was terrified that I was going to snap the lens or somehow mangle the frame in the process. I was also unable to get the lenses out without smearing my greasy, peanut butter stained hands all over them.

But sure enough, after a few repetitions, I got the hang of it. After some practice, you’ll surely figure it out too. It’s worth keeping in mind that it’s not an ideal option for midday change-outs in an uncontrolled environment.

One thing that Oakley products can’t be faulted for is high-quality clarity of vision. The Flight Deck is the I-Max theatre experience of goggles, and for more reasons than just the conspicuous lenses for which it is named. Much of the picture quality they provide comes from their PRIZM technology, Oakley’s take on a high-contrast, color enriching lens.

PRIZM tech isn’t unique to the Flight Deck or even to Oakley’s snow line as a whole. It represents their method for making eyewear technology for various sports, each curtailed to the specific environment in which they occur. The dyes that they use on a per-sport, per-location basis are what makes the Flight Deck such a high-quality contender amongst a lineup of much more recently engineered goggles. It’s also why there are so many different lenses to choose from in the Flight Deck’s lineup.

My only other big issue with the Flight Deck is in regards to the ventilation system. While the top of the goggles has extensive vents that stretch nearly the entirety of the goggle’s horizontal width, the bottoms are far less inspiring. It will become immediately apparent that they don’t clear well out of the bottom if you leave them on for a boot pack.

If you overheat on the hill, your experience can go quickly from “fighter pilot buzzing the alpine” to “trapped in the Biodome with Pauly Shore.” But don’t panic. This isn’t a unique experience, no matter what type of goggles you’re wearing. Rarely can I really exert myself in a pair of goggles without at least a little bit of fogging. I found that if I put them up on my helmet and gave my face some time to cool off, I was back to maximum clarity in a few short minutes.

The Oakley Flight Deck’s frame is so flexible that you can fold, bend, and otherwise mush them in various creative ways. Often I would take this as a sign that the goggles have some major durability issues. But in this case, I get the impression that their pliability makes them more resistant to cracking after strain. It’s the bend rather than break principle.

I applied more force to them than I would feel comfortable with any other pair of goggles to just change the lens. It seems that the Flight Deck’s frame is nigh-indestructible from an impact. Still, it might be subject to wear over time like soft goods are wont to do.

The frame is lined with a few layers of breathable and comfortable foam, with a thin felt liner between your face and the goggles themselves. One additional comment that I have about the frame construction is in regards to the foam. It seems like it soaks up sweat a little more than other models I’ve been testing. But that can probably be attributed to the moisture-wicking properties of the foam shunting sweat off as fast as possible.

After only a couple of skiing weekends, I noticed that the frame smelled a little bit too much like me. It’s not like I left them wet in the bag overnight either. Again this is an issue you’re likely to see with all of your outdoor gear. Keep in mind that I 1.) sweat more and 2.) eat much more garlic than the average person.

One thing that the Flight Deck can’t be faulted on is comfort. This can be attributed to the pliability of the frame, but I think it has more to do with the wide shape than anything else. Having such a large structure feels secure and comfortable. I definitely know that I’m wearing them, but that’s not a bad thing.

I think the goggles’ insulative properties make them comfortable. They’re wide enough to solve the problem of the dreaded cheek gaps between your buff and your goggles. They’re also OTG compatible with most prescription eyewear, which I guess should come as no surprise considering their size.

As a final note, the Flight Deck is also available in an XM variation for people with smaller faces. If you have a small or narrow face, it’s likely the XM will fit you better and still let you look cool.

Showing off the oversized, frameless design of the Flight Deck

The Flight Deck isn’t the perfect pair of goggles. But it is a really, really good pair. They’re particularly well suited for riding the resort in all manner of conditions. Their PRIZM lenses are versatile, somewhat justifying the price. When you put aside our criticisms regarding the lens change system and ventilation, the Flight Deck remains competitive with all of the cutting-edge models we’ve tried out. You don’t last long in the current outdoor industry obsessed with seasonal progression without some serious proof of concept.

Looking forward, we would love to see the legacy of the flight deck carried on. For something that conceptually leans into the space-age stormtrooper look, it’s relatively sparse in terms of features. I’m confident that with a retooled lens change system and minor improvements to the ventilation, the Flight Deck will be around for many seasons to come.

Oakley Flight Decks goggles have been around for a long time, and they still hold up as one of the most competitive models on the market. It helped solidify the “oversized” goggle as a trend in the ski world, and capitalizes on the huge frameless build by giving riders one of the largest fields of views available in a pair of goggles.

Specs and features of the Oakley Flight Deck

For more on the Flight Deck, be sure to check out our in-depth review and our write up on the best ski goggles to see how it stacks up against the competition.

How to swap out the Oakley Flight Deck Lenses?

Swapping out the lenses on the Flight Deck isn’t the most intuitive system that we’ve ever used. With a little practice it’s still a pretty dialed and efficient way of trading out your lenses on a break.

To remove the Flight Deck Lenses

To reinsert the Flight Deck Lenses

What does the Oakley Prizm technology do?

Every major goggle manufacturer has their in-house take on high-contrast lens technology. PRIZM is Oakley’s method of tailoring their products for a range of environments, by filtering out specific wavelengths of light. Prizm lenses are everywhere- from fishing glasses, to ski goggles. The lineup for their snow series is designed to deliver optimal performance in alpine environments.

The Flight Deck Prizm lenses are fairly well rounded for daily use, but are available in a variety of shades and VLTs to give you more options for your specific conditions. To see how Prizm technology competes against other competitors like Smith’s Chromapop, check out our best of goggles review.

What is the difference between Oakley Flight Deck and XM ski goggles?

The Flight Deck XM or “extra medium” has all of the same features of the larger size, but will fit people with smaller heads better, or for people who like spherical goggles but don’t want something as overstated as the full sized Flight Deck. For another of our favorite medium-sized frames, check out our review of the Smith Mag I/O.

Oakley Flight Deck lenses are highly-specialized for alpine environments, and are bigger than most lenses, so you want to take particular care when cleaning them. The process for cleaning the Flight deck isn’t any different from other goggles, it’s most important to remember never to clean your goggles with anything but the included carrying case.

Steps for cleaning the outside of your Flight Decks:

To clean the inside of your Flight Decks: 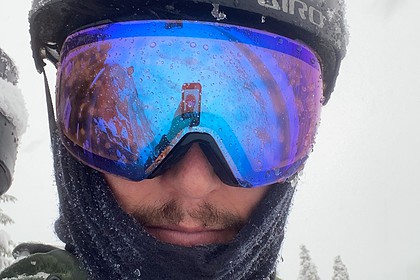 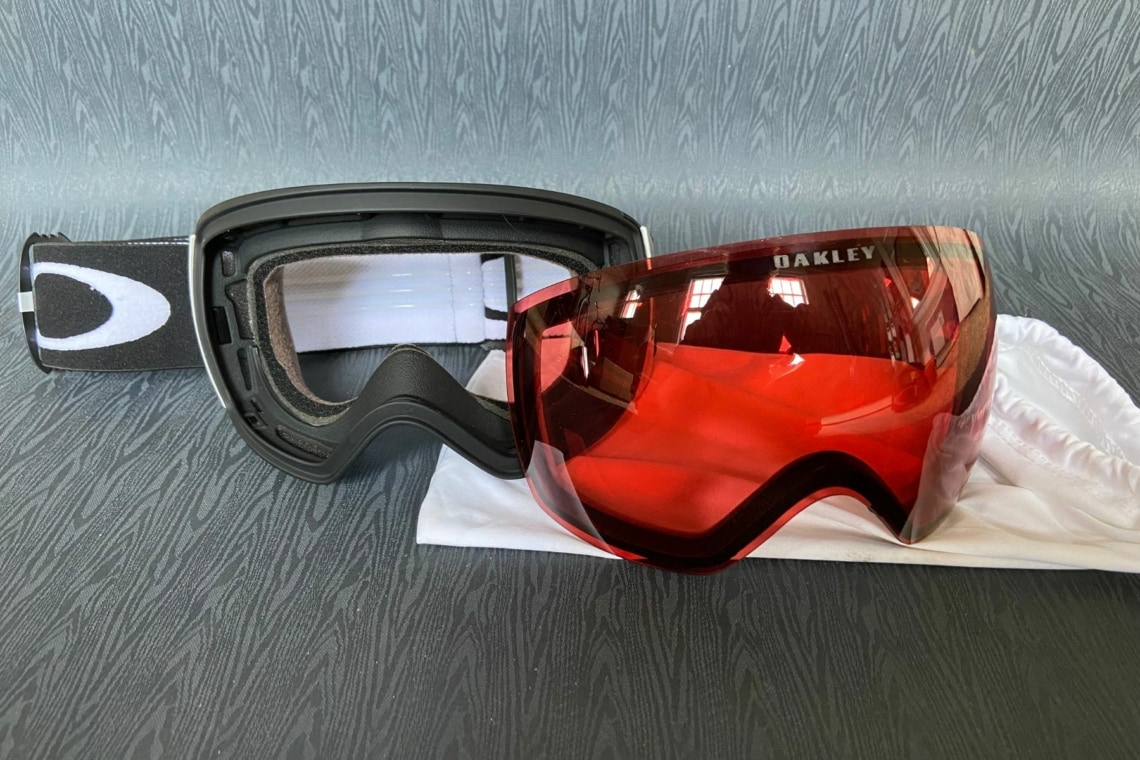 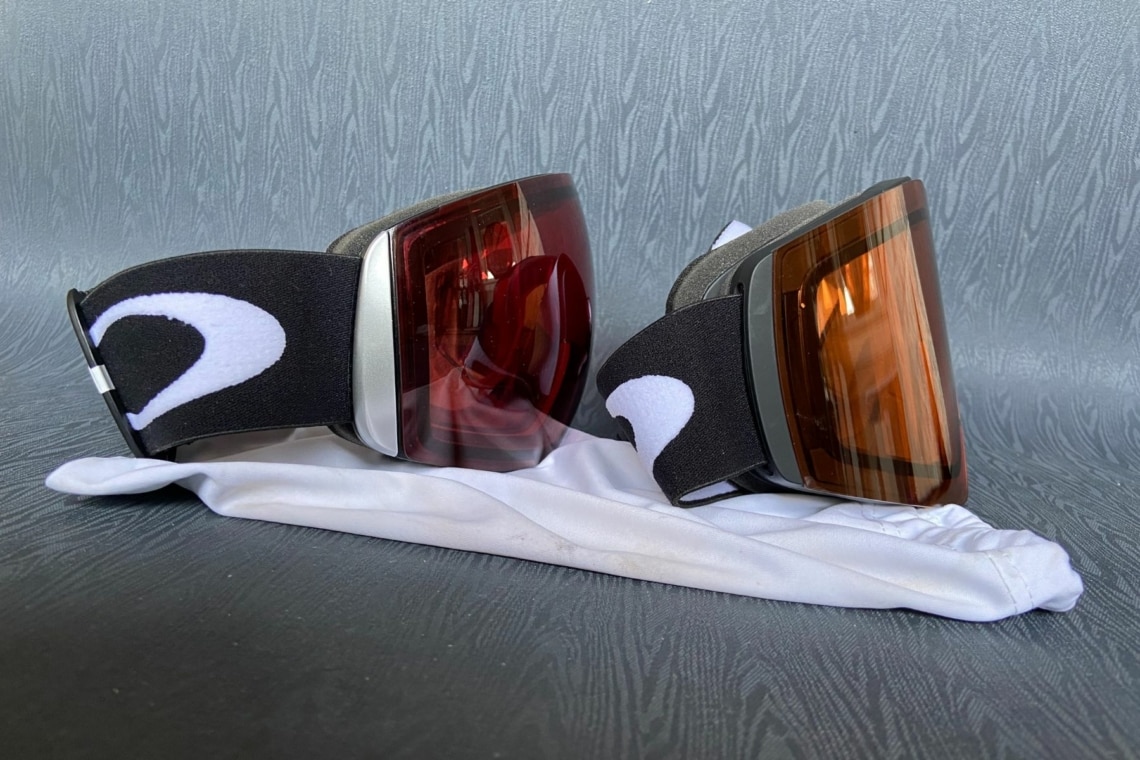