The Anon M4 Toric is one of the top-performing ski goggles across multiple categories. We recently had the chance to put it through our intense vetting process from the resort to the backcountry. The bottom line is that the M4 Toric is an exceptionally well-made product.

With unmatched lens change technology and very competitive quality of vision, it’s a can’t miss for skiers looking for the most versatile product on the market with a huge field of view.

Reasons NOT to buy

Other Top Ski Goggles we reviewed at DIVEIN.com:

Think the Anon M4 Toric is for you? If so, click on the link above for the latest prices or read on for the full review.

There are many things about the M4 Toric that set it apart from the competition. The obvious standout is the lens change system. Their magnetic swap system has been at the industry’s cutting edge for nearly a decade, first seen in their M1 model.

The M1 started off with 12 magnets that kept the lens in place, and the M4 currently allows for 18 total points of connection between the lens and the fame. Their lens change system allowed me to make a midday change between my highlights and my lowlights when wet Cascade snow storms roll in without taking off my mittens.

Traditionally, Anon’s goggles have only been compatible with cylindrical lenses. But the M4 can accept both the classic cylindrical and “Toric” lenses (for more on the Toric lens, see below). This makes them incredibly versatile and an excellent choice for skiers who want a litany of lenses for any condition but don’t want to pay for extra frames.

The “Toric” lens is Anon’s take on a spherical lens. In reality, it’s closer to a midpoint between a cylindrical and spherical design. Essentially, it’s a more subtly curved spherical lens set into a low-profile frame. Anon refers to the end result as “Wall to Wall Vision,” providing the broadest possible field of view without any obstruction around the frame’s periphery.

Combining these two styles, the Anon M4 virtually eliminates the visual distortion that comes with a flat lens and low-volume frame. Usually, this would make the goggles more prone to fogging, if not for their extensive preventative measures, but more on this later.

I found the allotted field of view particularly impressive. It was most pronounced while snowmobiling. I barely needed to turn my head to take the occasional quick glance at the back of my sled to make sure that my skis and passenger were still attached.

You don’t need to be flying down a snow-covered highway to appreciate the benefits of the Toric lens. Crowded resort slopes choked with unpredictable skiers are the perfect place to showcase the wide range of sight this lens shape affords you.

The M4 Toric MFI package itself comes with two lenses that you can choose from their lineup, available from the aggressively shaded 6% VLT all the way up to a 72% night lens. I had the chance to try out two different toric lenses, variable light (Variable Green 22%VLT) and a lowlight (Cloudy Pink 53%VLT), perfect for the rapidly changing and often overcast conditions in the PNW.

I must admit that while I’m impressed with Anon’s Perceive Technology, it didn’t particularly stand out while compared to other high-contrast competitors. This speaks more to the quality of the market than to any failing on Anon’s part.

Even with the darker green lens (which, in my experience, tends to discolor the environment), I noticed no color distortion or tinting until I took them off of my face.

I felt that the 22% Variable Green was a serviceable choice for unpredictable weather days. They were versatile enough to make me feel comfortable leaving my spare at the trailhead.

The Cloudy Pink, on the other hand, was a definite asset when moisture-laden winter storm clouds rolled in, and big flakes started falling. Higher VLT lenses are great for the flattest light days, but you’ll be squinting as soon as the sun slides out from behind the clouds. Keep in mind that if you opt for one of these lowlight or night lenses, you’ll also want to have something with a darker tint.

The most significant criticism that we can give the Toric lenses and the M4 is the price. If you want to stock up on spares, you can always opt for older and significantly more affordable cylindrical Sonar lenses available on their website.

As mentioned above, the M4 Toric, while being a large-ish goggle, is comparatively low-volume on the inside. Usually, this would make them much more prone to fogging. However, Anon has taken extensive measures to mitigate moisture buildup on both sides of the lens. I was surprised how well they held up while skinning during one of the wettest winter storms that I’ve ever skied in.

In large part, this can be attributed to the absolutely ludicrous number of vents perforating the molded plastic of the frame. These 16 vents are paired with what Anon is calling Integral Clarity Technology. This anti-fog treatment uses “chemical etching” in the design to help shunt water moisture towards the goggle’s perimeter.

The end result is impressive. Even after I dropped the lens in the snow while showing off the magnetic change system, I had no vision problems when I popped it back in. In fact, the only issues I had with moisture buildup occurred on the outside of the lens.

This has only really been an issue twice- I run warmer than most, but needless to say, I was a little frustrated to continually have to wipe down my lens. Still, this fault can easily be attributed to my combustion engine of a body or the moisture-laden storms that the PNW has been seeing lately.

We’ve covered some of the frame’s specifications earlier in the guide, from its wide-but-low style to the extensive ventilation holes punched around the circumference. I don’t want to get too bogged down in the details, but it’s worth mentioning that the flex in the frame makes popping your lenses out even more straightforward than it would with a more rigid design.

The foam is layered in two admirably breathable sections. An additional fleece layer forms an efficient and reliable barrier that prevents sweat from leaking through the foam’s porous membrane. According to their marketing copy, it is supposed to insulate your eyes from the rest of your sweaty face. This keeps you from starting to fog up when you’re exerting yourself during boot packs, digging yourself out of sloppy wet powder, or making aggressive, rapid-fire turns.

We’ve alluded to the dimensions of these goggles a few times throughout this review. But how does it actually feel on your face?

Well, I have a pretty big head to match the rest of my body, so the M4s fit me uncommonly well. But this isn’t like the Oakley Flight Deck in terms of being too big for people with normal-sized heads. You also avoid looking like an experimental aircraft pilot in a pair of oversized goggles because of the lower volume frame and the subtle horizontal curve on the Toric lens.

It’s worth noting that the M4 is the most oversized goggle that Anon has ever produced. If you’re afraid that it still might be a little too much for your face, you can always check out earlier versions such as the M3, which you can find for a pretty good deal. Alternatively, Smith’s Mag I/O has a competitively slick lens change system and a much less pronounced fit. 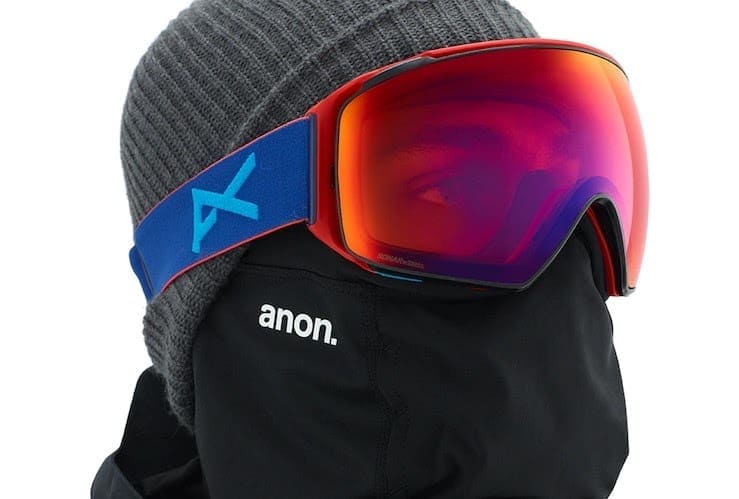 The MFI Facemask is included with our M4 Toric package was a quality addition, and something I probably would have opted to buy separately once I had the chance to try it out

The Anon M4 is a feature-heavy product in itself. But the MFI standard kit comes with a couple of additional items to round out your goggle experience. Chief among these is the MFI Facemask. This magnetic face shield connects to your goggles’ bottom via a wire, forming a seamless barrier of protection.

The perfect connection between the mask and the bottom of the M4’s frame keeps your hot, moisture-laden breath from billowing into the bottom of your goggles and obscuring your view.

MFI masks are also warm and practical wind blockers, as proven during a hasty dusk retreat sledding down the closed winter highways of the North Cascades. Finally, the M4 Toric comes with a hardshell case for your spare lens. This effectively solves the crisis of how to protect your spare lens during the day.

In total, my experience with Anon’s M4 was exceptional from the moment I opened the box, all the way to leaving my lenses out to dry on the kitchen counter. It’s a pricey goggle, that’s for sure. But in terms of the premium optical quality, a faultless lens change system, and aggressive anti-fog measures, it’s well worth the price.