Everything you need to know about the world’s largest fish: Whale Shark

Rhincodun typus, also known as whale shark, was firstly described in 1828 and is considered the largest fish in the world.

It is characterized by its large size that can reach up to 20 meters of total length and 34 tons in mass. In the next sections, we will be focusing on the main characteristics, distribution, ecotourism and threats concerning this outstanding animal.

The Whale Shark with fusiform body with three longitudinal ridges along its dorsal flanks, and a wide, flattened head.

Physical features of the Whale shark

As other families in the Order Orectolobiformes, whale shark has a skeletal anatomy, tooth, denticles, fins and barbel. It has a fusiform body with three longitudinal ridges along its dorsal flanks, and a wide, flattened head.

The dark dorsal surface has a pattern of light spots and stripes, whereas the ventral surface is light. This characteristic is mainly used for defense against predators, particularly in early years. Besides, the pattern of spots and stripes on the sides can be used to identify and differentiate between individuals. The hydrodynamic denticles in the skin allow the reduction of drag as well as surface-noise production.

Its skeleton is cartilaginous which confers flexibility and light-weight. Also, it lacks a rib-cage that is replaced by a sub-dermal corset of collagen fibers, thus saving even more weight.

What do whale shark eat?

Whale shark feeds on planktonic organisms, being harmless to humans. It filters the water which passes through porous pads before reaching the gills. Up to the moment, three techniques of feeding were identified. Ram-feeding consists in the forward movement of the fish with its mouth open, capturing low prey densities.

Suction feeding occurs when whale sharks swallows water and food while static, catching medium prey densities. When there is a high density of plankton, whale shark stays at the surface with part of its body out of the water and swimming in circles, the so called active surface ram-feeding.

However, climate change has become a big treat for corals which, in return, can affect whale sharks distribution.

Whale shark feeds on planktonic organisms and harmless to humans.

Whale shark reaches maturation around 25 years and can live up to 70 years – some researchers even suggest it can reach 120 years. whale shark is aplacental viviparous which means that embryos develop inside eggs that are retained within the mother’s body until they hatch. In this case, there is no placenta and the embryos are nourished through a yolk sac.

Different stages of embryo development were recorded inside the same mother, but multiple paternity and long-term pairing with the same male were not verified. This might indicate that eggs can be fertilized over a period of time and one of the reasons indicated is sperm storage.

It is suggested that whale sharks use olfactory capsules for chemo-sensory detection of dimethyl sulphide (DMS) that is often linked to plankton productivity. Even though vision is considered a smaller part in what regards to feeding. whale sharks have an eye in each side of the head that is able to roll back into the socket, thus giving them a broad field of vision.

In addition, R. typus respond very well to sounds with long wavelength and low frequency as they have the largest inner ear on Earth. Besides, they are able to react to water currents because of a mechano-sensory lateral line system.

Whale sharks have a special organ, so called ampullae of Lorenzini, around their heads that enable the detection of electric and magnetic fields, and aids on navigation. This is especially important for whale sharks because of their long-distance migrations.

Besides, they have a large foliated cerebellum that is related to several important surviving skills, such as prey-capture agility, habitat awareness, and others. 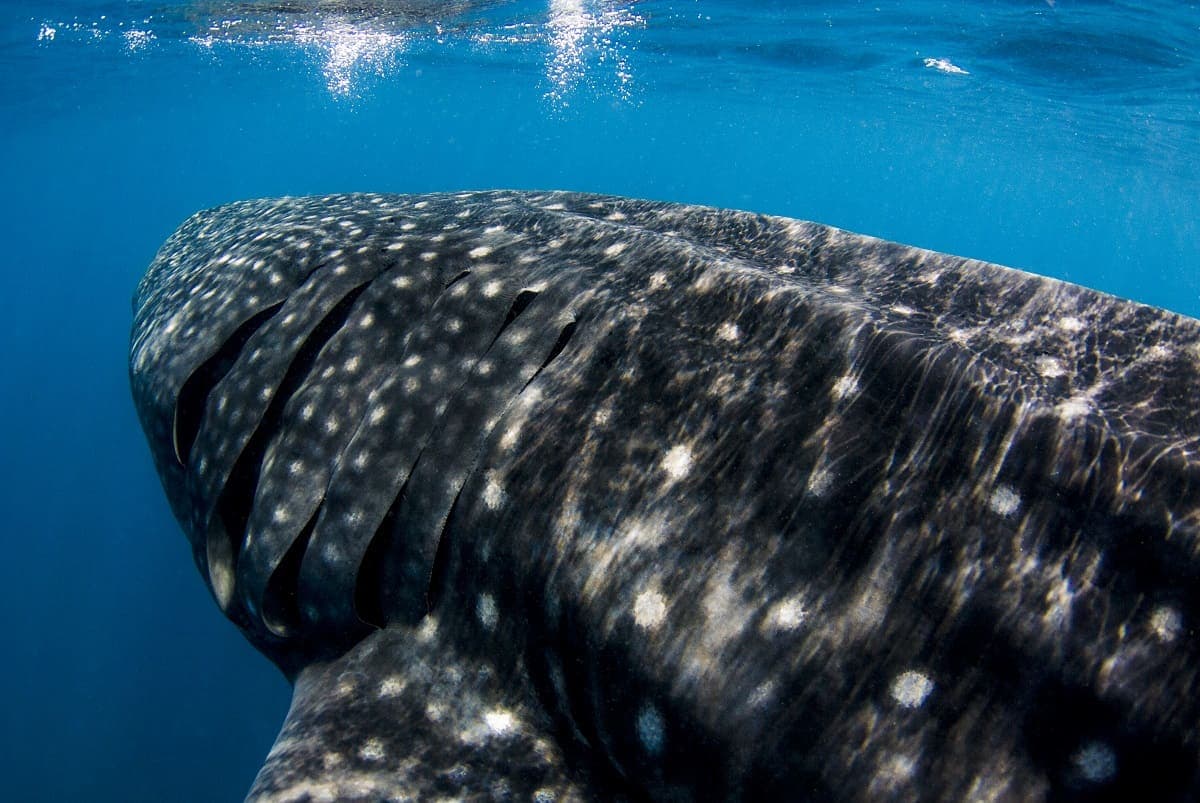 Whale sharks have a special organ, so called ampullae of Lorenzini which detect electric and magnetic fields, and aids on navigation.

Whale sharks are mainly distributed between 30ºN and 30ºS and are usually found in oceanic and coastal waters. They prefer tropical and warm temperate temperatures ranging from 20 to 35ºC.

However, there are records of whale sharks presence in the Mediterranean Sea, South Africa, New Zealand, California, Canada, and even Scotland. Despite their long-distance migrations, whale sharks frequently return to the area where they were born.

Even though these fishes are mainly epipelagic (0-200 m), they can also dive to mesopelagic (200-1000m) and bathypelagic zones (>1000 m) in response to environmental or bathymetric variations.

What is the impact of climate change in whale shark’s distribution?

One of the consequences of climate change for marine habitats is the increased temperatures. In fact, sea surface temperature (SST) is one of the main factors affecting whale shark distribution. It is suggested that this fish avoids high temperatures, so metabolic rates don’t increase.

In addition, they avoid low temperatures that could limit metabolic function. Predictive studies showed that higher SST can lead to a change in the distribution of whale sharks, triggering a distributional shift to the poles in the Atlantic and Indian Oceans. 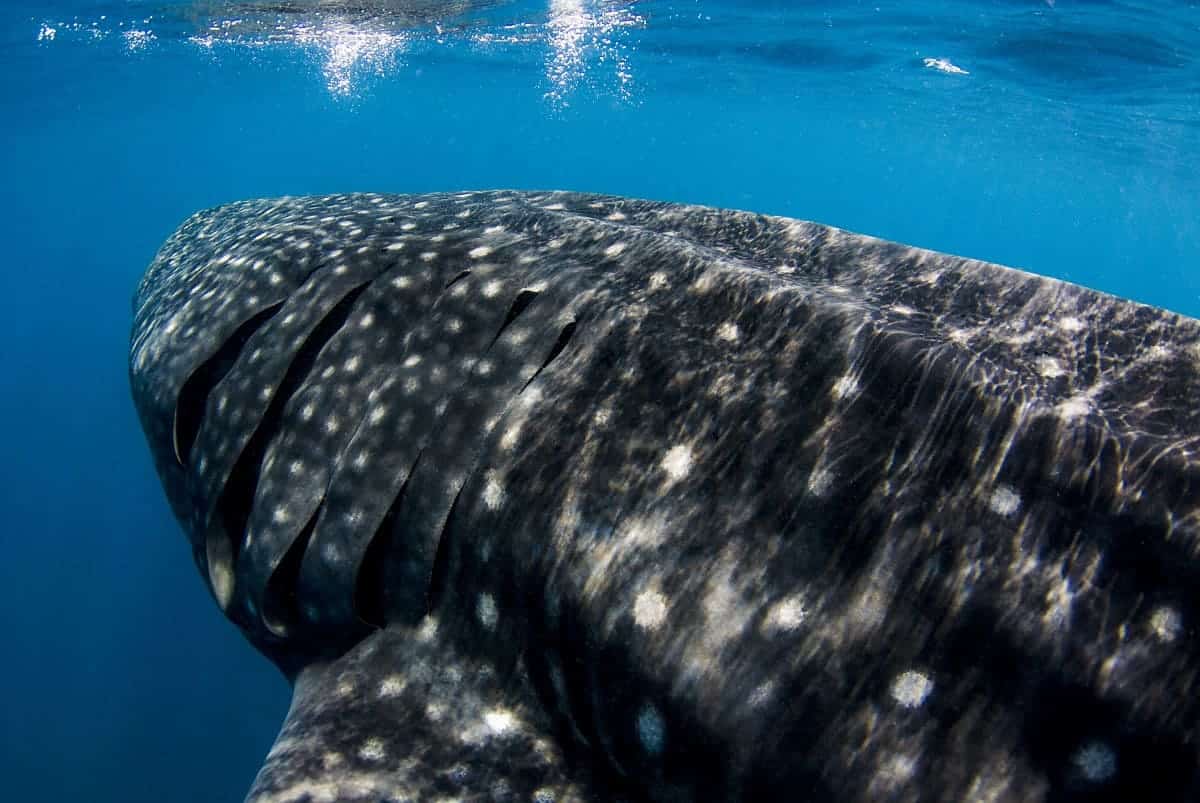 Association with other organisms and aggregations

Whale sharks can be found in association with other fauna. It is common to find parasitic copepods in large fish like this, along with commensal organisms that feed on the bacteria of the skin. In addition, we can find whale shark accompanied by pilot fishes, live-sharksucker and remoras.

On top of that, cobia Rachycentron canadum can also be found with this fish and it has been mistaken as baby whale sharks. In fact, whale shark is rarely seen with other sharks, mainly because of the temperature separation between habitats. But, when the productivity is high, they are seen with other plankton feeding species, such as mantas.

Whale sharks are not considered very social animals as they don’t form groups. Nevertheless, there are reports of predictable seasonal aggregations of more than 10 individuals in some areas which can be owed to higher food availability. It has been suggested that such aggregations are accidental, even though they increase the chances to find a mate.

Therefore, some authors propose that whale sharks are facultatively social.

Due to their swimming habits at the surface, whale sharks can collide with boats and get injured. Boat strikes and propeller strikes are frequently documented in monitoring programs.

Because of their late maturation, hunting and fisheries have significant effects on whale shark populations. Its oil was used to waterproof boats and for shoe polish. The flesh was used in Taiwanese restaurants and the fins were sold as display or trophy or discarded. This lead to an increase of fisheries in India, Philippines and Taiwan.

However, whale shark fisheries in these countries were later prohibited. Meanwhile, there are reports of accidental catches in nets targeting other fishes with which R. typus is frequently found.

Nowadays, whale shark belongs to the red list of endangered species of the International Union for Conservation of Nature (IUCN) due to the falling populations and exploitation. Fortunately, several countries have measures to conserve the populations of this unique fish.

Whale Shark belongs to the red list of endangered species due to the falling populations and exploitation.

Where can you see Whale sharks

As it has a human friendly-nature, touristic activities involving whale shark have increased since the 90’s. Ningaloo in Australia, Philippines, Mozambique, Seychelles, Djibouti, Belize, Holbox in Mexico, and North Gulf of California are the main regions with tourism activities dedicated to this fish. In some areas, like Azores in Portugal, its presence is only temporary, depending on the food available.

In fact, Ningaloo Reef and the Philippines are the main hotspots of whale shark abundance, thus leading thousands of tourists to visit them every year. Here, whale sharks aggregate between March and July, and from November to June, respectively. Tourists have the opportunity to dive with them. Additionally, in Ningaloo, there are regular flights that overfly aggregation areas during this season. It is suggested that aggregations found in Belize and Holbox are interconnected and it is possible to dive with whale sharks from June to September. Also, in Djibouti Whale Sharks show up from October to February.

However, these interactions may have effects. At short term, these fishes can stop feeding effectively by developing avoidance behavior, rapid diving, eye-rolling and banking. Long-term effects can vary from disturbance of normal feeding activities to avoidance of these areas, stress and mortality.

Ningaloo Reef in Australia and the Philippines are the main hotspots of Whale Shark.

What can we do to cause less harm to whale shark during a dive?

If you are going to book a whale shark encounter with a company, there are some things that you can do to minimize negative interactions with the fish. When diving with a whale shark, do not take flash photography and do not touch the animal or approach it from the front. You should keep a distance of 3 meters.

Besides, the boats should also keep a safe distance off, at least, 20 meters. Be sure that the company is involved in research and/or monitoring projects regarding whale sharks, as these are contributing to the conservation of the species.

The company should have a code of conduct as well as legislative controls and licenses. Being that said, be responsible and enjoy your dive!