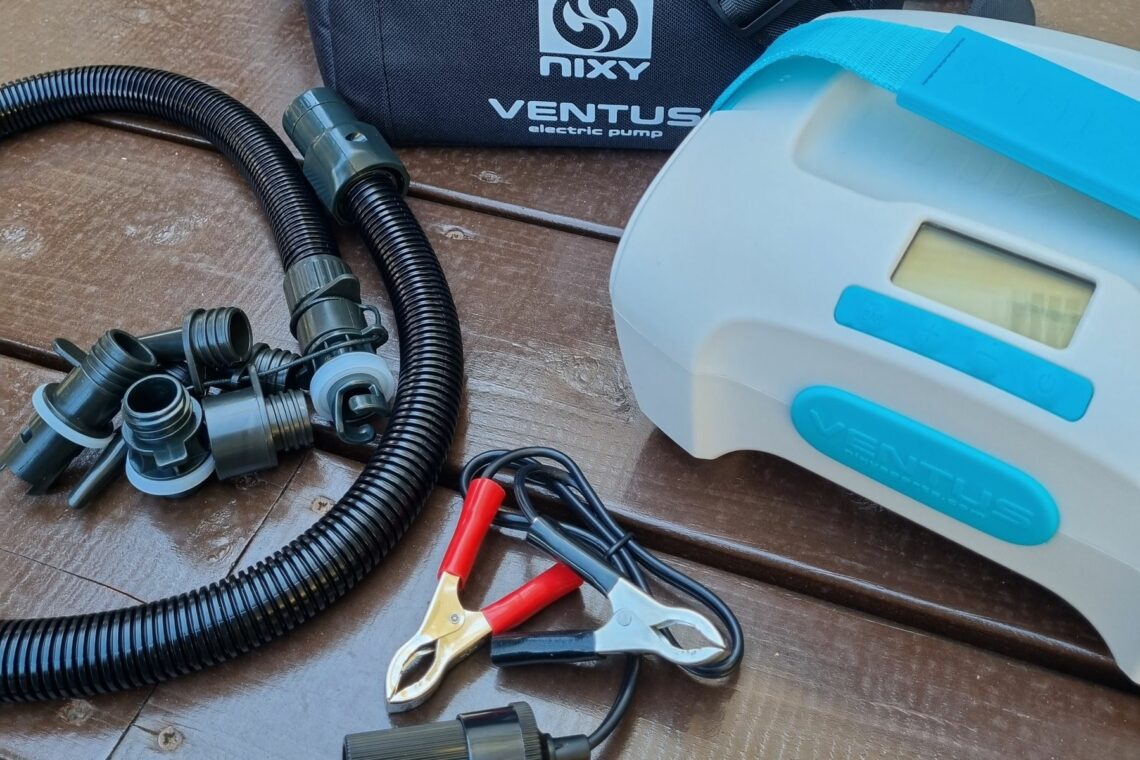 Our review team:
Christos Nicolaou
Editor at DIVEIN.com
Christos loves the water and traveling to warm destinations.
Torben Lonne
Editor and Co-founder at DIVEIN.com
Torben traveled around South East Asia for scuba diving and almost didn’t come back. His affinity for gear that works and his generosity for guiding people on their own path match his energy as editor of all things travel-related.
Disclosure: We are reader supported, and earn affiliate commissions If you find a good deal on DIVEIN, you click to the retailer, and you buy the product, we get a commission of the sale. That's is how we pay ourselves. It does not make the product pricier for you. when you buy through us.

The NIXY Ventus electric pump is a very portable, affordable pump that has proven to be one of the best.

Change your clothes or stretch while your SUP or kayak inflates. That it also deflates the inflatables makes it easier to pack up when done too.

For these reasons, the Ventus is a popular add-on when buying an iSUP from NIXY sports. It’s a 12V machine that’s easy to use, light and portable. You can use it on iSUPs, inflatable kayaks, inflatable dinghies, and other inflatable products.

The most prominent feature of the NIXY Ventus electric pump is its active cooling technology which allows you to use the pump to consecutively inflate more than one board without the pump overheating.

The main selling point of this innovative electric air pump is the frost-activated cooling system that allows the pump to be used for up to 30 minutes, allowing you to inflate 3 paddles boards or similar inflatable products.

This electric air pump is one of the most popular products on the market and for good reason. It’s easy to use and transport and gets the job done, allowing you to inflate your iSUP or inflatable kayak using the 12V power from your car.

Additionally, the Shark II is compatible with most of the major SUP brands and many of the major inflatable kayak and boat brands.

Reasons NOT to buy:

We can all agree that pumping up an iSUP is the least enjoyable part of paddle boarding. Luckily electric pumps are on the rise. The NIXY Ventus pump is one among a crowded field, but it avails itself nicely by comparison.

What sticks out first and foremost about the Ventus is its usefulness for multiple types of inflatable vessels and its ability to pump them up consecutively.

The NIXY Ventus SUP electric pump comes with 7 nozzle adapters. These adaptors mean that the Ventus can pump up any type of inflatable from iSUPs, inflatable kayaks, rafts and even beds.

The Ventus also has a built-in cooling system, NIXY’s proprietary tech that prevents overheating when blowing up consecutive paddle boards. That is matched with a smart LCD controller that both allows for a custom PSI to be set and an auto shut off when the target is reached.

It inflates in two stages, quickly blowing up in the initial stage before entering the second stage where pressure becomes more demanding of both the cooling system and electricity itself.

According to NIXY, the Ventus will be able to inflate up to 10 paddle boards in a row. If it overheats, the Ventus will automatically turn off and continue to use the cooling system to cool down as rapidly as possible.

We found that the hose gets quite hot, so be mindful that it doesn’t kink–even though it has non-kinking design. The compressor noise, with the cooling at work, becomes increasingly louder with consecutive inflatables, but it inflated 6 paddle boards with only a little bit of a lag on the last two.

It took around 9 minutes to inflate the G4 Nixy Newport, a 10’6 long SUP with 300 liters of volume. On the last paddle board, also a Newport it took closer to 10 minutes.

The NIXY Ventus also comes with a deflate setting that allows you to remove all the air from your inflatable before packing it away. By removing all the air you are able to pack the paddle board to be more compact allowing you more room in the backpack or storage bag for additional accessories.

The NIXY Ventus is very lightweight, weighing only 4lbs, and comes with a practical carry bag. The carry bag has a comfortable handle as well as an over-the-shoulder strap. If you pack up your NIXY board properly, you can easily fit the pump into your NIXY iSUP bag.

The NIXY Ventus requires a 12V source and comes with a 10 foot 12V cigarette lighter plug-in, as well as 12V battery alligator clips. Therefore, as long as you have a car with you, you can use your NIXY Ventus electric pump.

You can also opt to purchase the add-on of a battery pack, which you’ll obviously need if you don’t have a car, or wish to pump up your board on the beach or lake by the water. 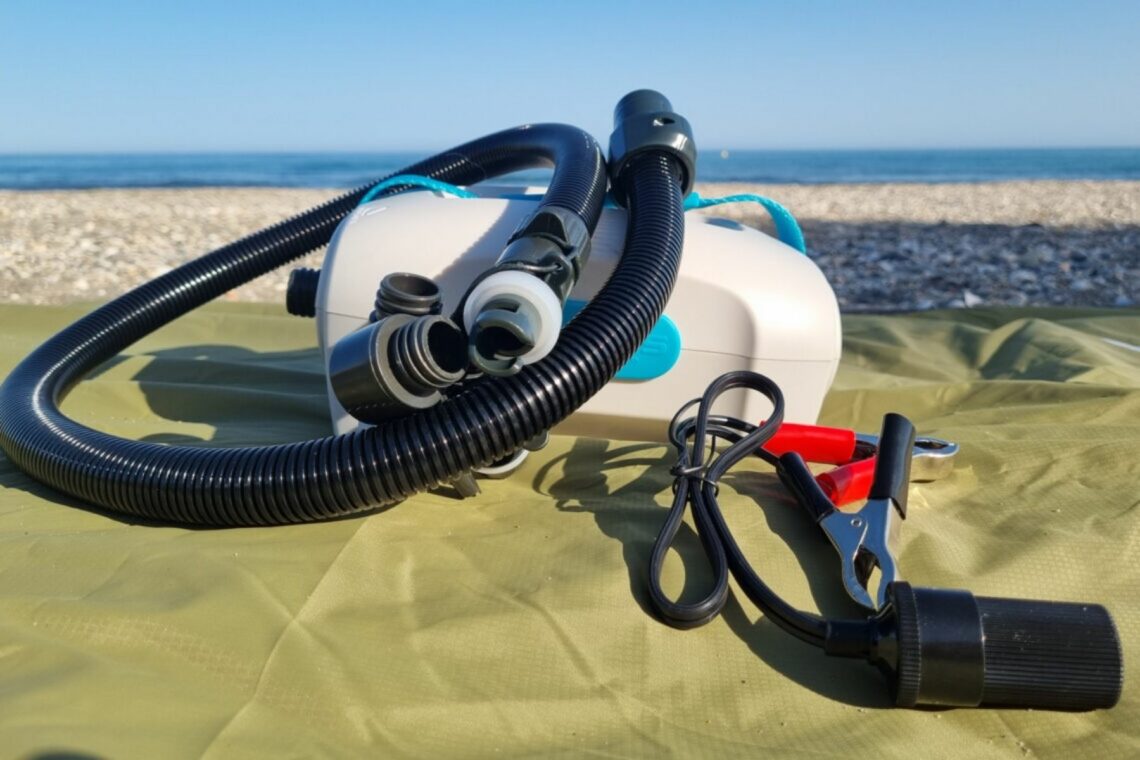 The Ventus electric pump comes at a good price. Given the fact it can consecutively inflate at least 10 paddle boards and has a range of inflation up to 20 PSI, this pump is well worth the investment.

It is at a similar price point to other affordable options like the iRocker 12V electric pump, and its performance is comparable. Lightweight, portable and effective, the NIXY Ventus is one of the best electric pumps currently available on the market.

Review of:
Surfstar 10’6 Advance All Around

Review of:
Review of Aqua Parka by Gill Marine

Do we recommend it?

Yes, we definitely recommend the NIXY Ventus electric pump as one of the most efficient electric pumps on the market.

Given the convenience and reliability that this electric air pump affords you, the NIXY Ventus is a fantastic accessory for your paddle board bag. It will not only allow you to quickly and easily inflate your paddle board but also efficiently deflate it. We recommend this electric pump for anybody who takes their car to get to their favorite SUP spot.

Reasons NOT to buy:

How to use the NIXY Ventus sup electric pump?

To use the NIXY Ventus electric pump, first, connect the hose to both the SUP and the “inflate” connection of the electric pump. Then set your PSI based on your paddle board’s requirements. Finally, simply press the power button and wait for the NIXY Ventus to do all the work. To deflate the inflatable, move the hose to the “deflate” connection on the pump and repeat.

How fast does the NIXY Ventus sup electric pump inflate a paddle board?

Check out our in-depth guide to the NIXY Ventus to find out more about the various features that this product has to offer.

Where to buy the NIXY Ventus sup electric pump?

You can buy the NIXY Ventus electric SUP pump online from a number of different places. Read our in-depth guide to find out more.

Is the NIXY Ventus sup electric pump covered by warranty?

The NIXY Ventus SUP electric pump is covered by a 1-year warranty.