The great white shark (Carcharodon carcharias) is by far the most famous, and infamous, of all sharks.

It is the second largest shark in the world, and one of the oldest predators still in existence. Highly migratory, it is found in almost all of the oceans in the world, but sightings (and attacks) are predominant in certain areas. It tops the list of human attacks, and is not a shark that should be sought out by scuba divers, unless diving inside a cage. Shark Series: The Thresher Shark

Primarily known for its size (and it’s starring role in Steven Spielberg’s “Jaws”, based on the novel by Peter Benchley), the great white shark can exceed 6 meters in length and 2 tons in weight. More shark facts on The Truth About Sharks. The shark is large and robustly built, with cone-shaped body, a white underbelly (where it derives it’s name from) and a dorsal area that can be either grey, brown, or blue. The pectoral fins are large and pointed in shape, whereas the dorsal fins is relatively small in comparison with the shark’s overall size. Females are generally larger than males, with males averaging 4-5 meters in length and a weight up to 1500 kg. The title of “largest shark ever caught” is somewhat disputed, with sharks caught Australia, South Africa, and Malta competing. The largest one reliably measured was 6.4 meters. However, unverified specimens have been caught in both in Malta (measuring 7.13) and Canada (measuring more than 11 meters). The exact size of these specimen has been disputed, though.

Where to see it

For a shark of its size, the great white is often found in surprisingly shallow coastal waters, as well as in deeper offshore waters. It’s found in almost all of the world’s major oceans, including the Atlantic, Pacific, and Indian oceans, the South China Sea, and the Mediterranean. Relatively temperature resilient, it thrives in cooler waters than most sharks, both on the northern and southern hemisphere. It is particularly often seen in South Africa, Australia, and off the United States west coast, though it has been spotted off of Hawaii, in the English channel, and in the Irish Sea.

Best times to see it

The great white is generally considered the most dangerous of all sharks, ranking number one on the list of shark attacks on humans. However, many attacks are most likely cases of mistaken identities, where sharks mistakes surfers or swimmers for seals or other marine animals.

Most attacks are single-bite attacks, with the shark swimming off after the initial attack, which supports the theory of mistaken identity. However, due to the size of the mouth of the shark and the immense bite force, a single bite is often enough to seriously injure or even kill a human being. And while the great white shark account for more shark attacks than other species, attacks are overall still rare. Nonetheless, the great white is a formidable predator that should be taken seriously. Most dives with great whites are cage dives, using hookah-gear, and not open-water scuba dives.

The great white shark is categorized as “vulnerable” by the International Union for the Conservation of Nature, though not much is known about the actual status of the shark. They are rarely commercially fished, but sometimes casually caught by fishermen fishing for other species. However, the shark reaches maturity quite late, typically at 15 years of age (sharks live up to 30 years of age) means that the species reproduces slowly, so even small dents into the population take a long time to recuperate. The primary threat to the shark is thought to be loss of habitat and food sources due to overfishing of commercial fish species, and of cause Shark finning it still a very big problem to shark population world wide. Have you ever been diving with the Great White Shark? Tell about your experiences diving with this amazing shark! 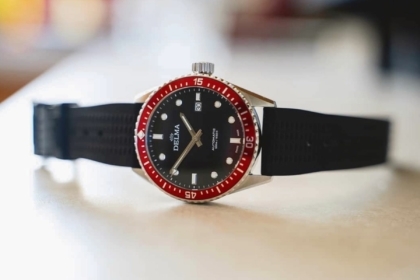