Torben Lonne
PADI instructor and Review Editor
Torben traveled around South East Asia for scuba diving and almost didn’t come back. His affinity for gear that works and his generosity for guiding people on their own path match his energy as editor of all things travel-related

Bikini Atoll is world famous for two things: inspiring the last big innovation in ladies’ swimwear and the wrecks left over from the Operation Crossroads nuclear tests.

An 11-hour flight from Tokyo and a five-hour flight from Honolulu, Bikini Atoll, the northern most chain in the Marshall Islands is one of the remotest places on earth and therefore an adventure that most divers can’t experience. Consisting of 23 separate islands, it surrounds an 8 km deep lagoon and was known for its rich fishing reefs that supported 40 local families. Before the tests, it was an island paradise.

In 1946 the United States was the world’s only Nuclear power. The previous year had seen the US Air Force dropping atomic bombs on Hiroshima and Nagasaki to force Japan’s surrender. These attacks had stunned the military and scientific establishments, being much more powerful than they’d thought. While popular opinion has it that the 1946 nuclear tests were designed to awe the Soviets, it was mainly inter-service rivalry that led to the Bikini tests. Both the military and scientific community were keen to understand more about the power of these new weapons.

The main drivers of the Bikini tests were the US Navy, who were terrified that nuclear weapons would make their fleet obsolete overnight. Keen to show that the service was still relevant, they set up the tests to show how modern warships could stand up to the A-bomb. Taking over the remote atoll at Bikini, the idea was to place a collection of surplus ships and bombard them with two of the Air Force’s new bombs.

Brushing aside opposition from the original Manhattan scientists, local inhabitants and animal rights campaigners, local islanders were moved to the nearby island of Kwajalein, with the promise that they’d be able to return in six months. The Navy also wanted to show the survivability of their sailors to nuclear attack. So, they packed $450 million worth of target ships with livestock, including goats, cows and Guinea pigs.

“70 years on, the islands have remarkably begun to recover. Marine life seems to be extremely resilient to nuclear radiation and the lagoon is now a haven for coral and rare fish. ”

At 9 o’clock, July 1st 1946 the first nuclear attack on ships at sea commenced when a bomber called Dave’s Dream dropped a 23kt nuclear weapon on the fleet below. It was called Gilda and was nearly identical to the bomb dropped on Nagasaki, less than a year before.

Although spectacular, the results were disappointing. Only five ships were sunk and none of those were the big battleships. The US Navy was quick to point out the sturdiness of their ships, with Secretary of the Navy James Forrestal telling reporters that capital ships were near invulnerable to any hits above the water. Further investigation in fact showed that the bomber had missed its target by almost 700m. Had the bomb exploded over the Nevada as planned, at least nine ships would have been obliterated.

About a month later, the Navy tried again. A similar bomb was suspended 90 feet below LSM-60, an old landing ship and detonated at 08:35. BAKER was everything ABLE wasn’t. Nine ships in total, including two battleships and an aircraft were all wrecked and sunk in the lagoon.

It resulted in serious radioactivity and environmental damage. The warships that didn’t sink were to be decontaminated, boarded and repaired, but after BAKER, most were too radioactive to even approach safely. For example, the old Japanese battleship Nagato was so badly contaminated that sailors could only board her for 15 minutes at a time. Many were either towed ashore and left to decay, or towed to Kwajalein and left to sink. The Atomic Energy Commission later described Test BAKER as the world’s first nuclear disaster.

Despite their promises to the islanders, The US military continued to use Bikini Atoll as a nuclear testing ground for a number of years after the 1946 tests, thwarting their return. In 1955’s Operation Castle, the largest ever US nuclear test left the island uninhabitable for decades.

70 years on, the islands have remarkably begun to recover. Marine life seems to be extremely resilient to nuclear radiation and the lagoon is now a haven for coral and rare fish. In fact, recent research has shown that adaptation shown by the local coral could hold some key insights for cancer treatment.

Despite a low-level of persisting radioactivity, the 13 wrecks that sit at the bottom of the lagoon have proved to be a big draw and recreational diving started in 2011. The local government now runs annual expeditions and unsurprisingly, the massive 36,000 ton USS Saratoga is the biggest attraction, sitting upright and almost perfectly preserved.

Explore the nuclear ghost fleet and learn more about each wreck without having to don a mask, tank and Geiger counter. 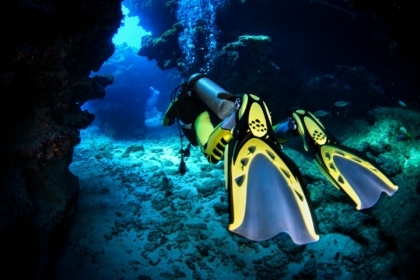